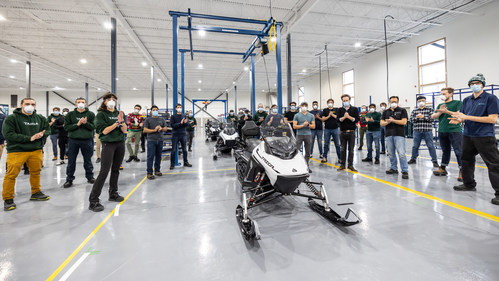 Winter holidays are all about adrenaline-pumping winter sports for the more adventurous. The green wave has certainly hit this sector as well, but it is still in its infancy. One of the companies dedicated exclusively to bringing electric vehicles to the powersports market has taken a big step forward – its first electric snowmobiles have rolled off the assembly line.

Ever since the Tesla phenomenon started making waves, there have been all kinds of startups that have wanted to become the Tesla of this or that. In this specific case, the three co-founders of the Canadian company Taiga Motors were inspired by Elon Musk’s revolutionary concepts and wanted to create something similar for the snowmobile world. Four years after first presenting the idea of â€‹â€‹making electric snowmobiles, the startup successfully completed the construction of its first batch.

Earlier this year, Taiga Motors proudly announced that it had already exceeded 100 fleet pre-orders for its future range. One of the three models available is the Atlas Crossover which can reach 100 km / h (62 mph) in less than three seconds and cut snow with its 180 HP. Its high performance battery is supposed to keep it running for 140 km and can be recharged up to 80% in 20 minutes.

Getting to this point was not easy. Throughout 2021, Taiga has focused on improving the efficiency of various elements of the manufacturing process, including battery automation, chassis systems and connected platforms. At its 130,000 square foot facility in Montreal, the company is increasing production.

In addition to snowmobiles, it also offers electric outboards and innovative off-road charging stations. Recently, she installed the first ones, with level 2 chargers and level 3 DC fast chargers, on a trail located in the Mauricie and LanaudiÃ¨re regions of Quebec. It became the world’s first long-distance snowmobile trail with access to chargers.

The first Taiga electric snowmobiles are expected to be delivered to customers in early 2022, once final official approvals have been obtained.