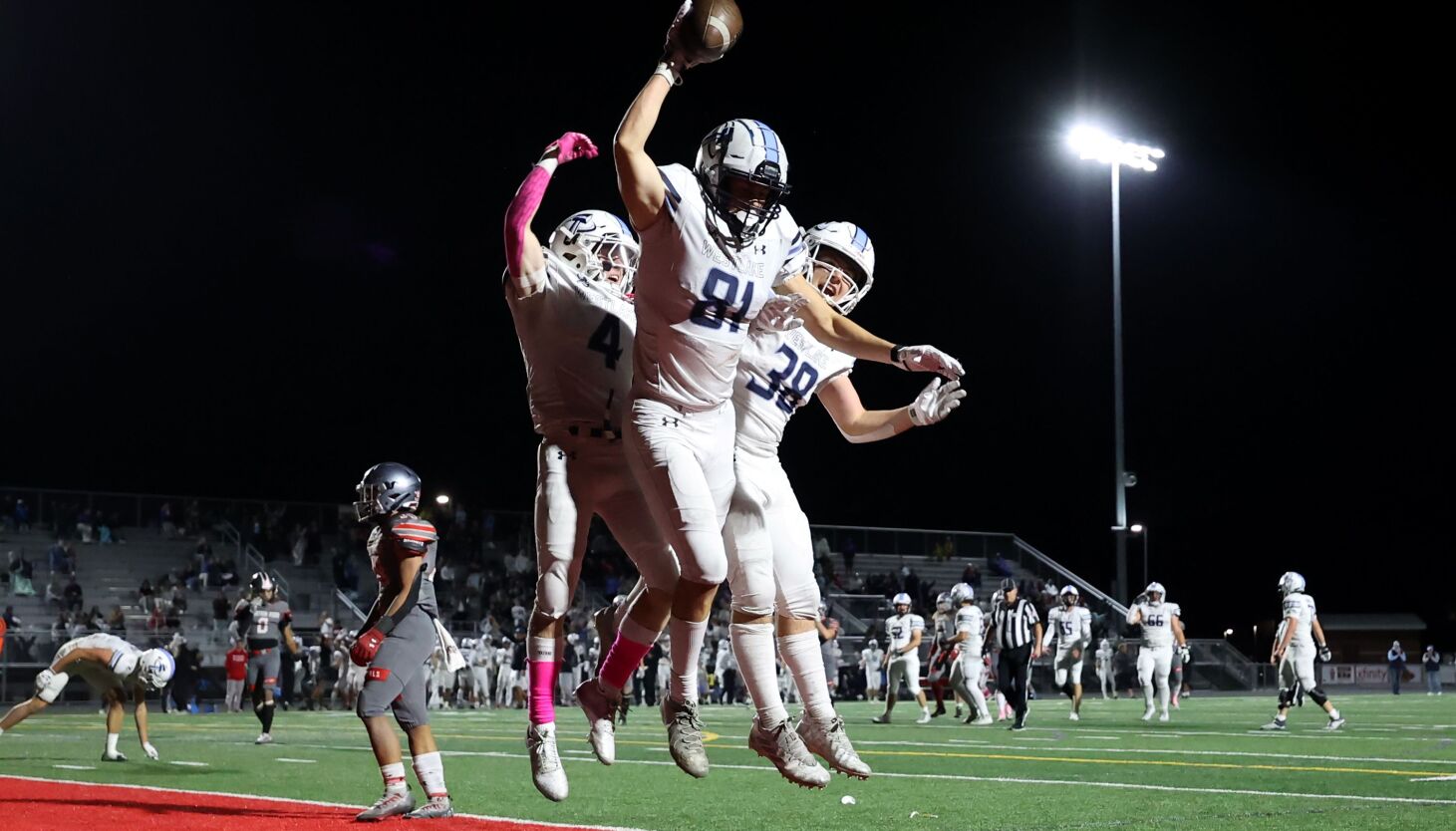 Weber beat Roy 14-0 in the second half to secure the first-round playoff win. Completing the defense’s shutout, quarterbacks Aidan Carter and Tyce Abbott connected to Salesi Moa for both second-half touchdowns, propelling the Warriors into the second round – where they will face Farmington, to whom they lost by 28 points at the start of the season.

Points weren’t hard to come by for the Vikings in their first playoff game as they edged out Cyprus to advance to the second round. Pleasant Grove quarterback Nic Staffierit threw six touchdowns to six different receivers. The Vikings will face Bingham in the second round.

Mountain Ridge got revenge for a regular season loss by knocking out Westlake with a solid defensive fourth quarter. Four different Sentinels found the end zone in victory. Westlake was led by Aiden Bayless, who threw all three of the Thunder’s touchdowns.

The Knights scored 39 of their 46 points in the second and third quarters as they comfortably knocked out Copper Hills to advance to second round 6A. Four different Lone Peak players recorded a rushing touchdown, led by Kaden Hodson, who scored twice. The Knights travel to Syracuse next week to face the Titans in the second round.

Fremont, seeded No. 18, went on the road and never trailed in a first-round win over Granger. Slade Parker threw for two touchdowns and Dax Iverson scored three field goals to lead the way for the Silverwolves.

Three defensive touchdowns and seven total takeaways propelled the Lancers past Herriman and into the second round 6A. Elias Parkinson, Jaxson Henderson and Teague Farr each turned offense into defense with interceptions that were returned for Layton’s scores. The Lancers will face top-seeded Corner Canyon in the second round.

“Our offense needs to do a little better, but our defense has gotten stronger for us. We put him on the defensive from the start saying they were going to win the game for us tonight and they really stepped up.

West controlled the game from start to finish comfortably dispatching Hunter on Friday night to secure a matchup with West Jordan in Round 6A. Efoti Vaenuku netted two quick scores to lead the way for the Panthers.

The East attack couldn’t be stopped as they rode to a 70-28 win over Skyline. The Leopards scored 10 touchdowns in this one, including three at the hands of Michael Fonua. Quarterback Tucker McCormick also found teammates in the end zone twice for the Leopards.

A big 42-point half from Alta was enough to finish Bonneville and advance to the 5A playoffs. Hawks Matt McKea threw five touchdown passes, two for Jace Turner and three for Noah Flores.

An extra point missed by the Wildcats on the final touchdown of the game proved to be the ultimate difference maker, as Wasatch narrowly beat Woods Cross to advance to the second round. Chris Cook recorded two rushing touchdowns for the Wasps, including 63 yards late in the second quarter.

“I couldn’t be more proud of our guys for finding a way to get a playoff win on the road. We played a full game with four turnovers on defense, a balanced offense and huge special teams play to get the PAT block in the fourth quarter by Austin McNaughton. We are excited to have another week with our seniors.

The Aviators used a 17-0 third quarter advantage to pull away from Viewmont and book their spot in Round 5A. Cedar Valley put the game on ice with two interceptions returned for touchdowns in the fourth quarter (Devoux Tuataga and Taygen Hansen). The Aviators will face Region 7 foe Stansbury in the second round.

“Our team went out on a mission in the second half and played phenomenally. The kids worked so hard and deserved the opportunity to play another week. Congratulations to Viewmont and Coach Jones for a great season as well.

Box Elder took a 14-0 lead, then extended it on a 75-yard punt return from Cole Mortensen. The Rams fought back with two scores on their own, but couldn’t find the tying touchdown in the final 16 minutes of the game.

The Miners built a big lead in the first half and never looked back beating Timpanogos in the first round of the 5A playoffs. Park City will face their toughest test of the season in the second round, against top seed Lehi on the road.

Five different Tigers players scored in the first 16 minutes of the game, allowing Orem to lead by more than 30 points early in the game. They would win by 49 points and clinch their spot in the second round of the 5A playoffs.

Olympus led all the way after scoring early in the first quarter, beating Payson 24-8. The Olympus defense made life as difficult as possible for Payson, allowing just one touchdown. The Titans now face fifth-seeded Brighton.

Sky View outscored Hurricane 41-6 and advanced to the second round of the 4A playoffs. The Bobcats got three rushing touchdowns in this one, two from Michael Furgeson and one from Brevin Egbert.

Just one touchdown in the first quarter was enough for Cedar City to earn the win over the Logan Grizzlies. The single touchdown came at the hands of Koden Lunt who ran it for the Reds. Cedar City’s defense didn’t allow Logan to score a single point.

Warriors Hunter Johnson threw three touchdown passes to help Snow Canyon edge Green Canyon 26-21. Snow Canyon came out hot and took a 20-0 halftime lead. Green Canyon didn’t want to go down without a fight and rallied from a 14-20 deficit after the third quarter. Wolves came close, but Snow Canyon picked up their fourth-place win and advances to the playoffs.

Ashton Macfarlane extended the Riverhawks’ lead to double digits and they never looked back, finishing with a 24-0 playoff win over Pine View. Jackson Olsen and JT White also scored for Ridgeline while the defense got a shutout.

Mountain Crest had a consistent offense all night, giving them a 35-15 victory over Bear River. Four of Mustang’s five touchdowns were rushing touchdowns, and the last was a 15-yard pick six from Trevis Leiser.

Larson Pogroszewski ran for four touchdowns for Manti in the 48-15 win over Ogden. Manti finished the first half 12-0, but exploded for another 36 in the second half. The Templars defense also did a good job of making sure Ogden never had the chance to make it a close game.

Tied at halftime, the Hawks scored 21 unanswered points over the past two quarters to book their place in the second round – where they will face Granstville. Tyler Allen led the charge in the second half for North Sanpete, recording three total touchdowns.

Juan Diego held off a Union comeback in the second half and won 38-35. The Soaring Eagles led 14-0 at halftime, but the Cougars weren’t ready to give up and rallied from a 20-31 deficit heading into the fourth. They used their momentum to score 15 goals in the fourth, but a Lukifanga Kaumatule touchdown for Juan Diego sealed the deal and ended Union’s comeback hopes.

Fifth-seeded Richfield cruised through his first playoff game against Carbon to secure a second-round matchup with Canyon View. Senior Emery Thorson recorded six total touchdowns in the game, highlighted by a 93-yard kickoff return touchdown on the game opener.

A touchdown in the final two minutes was the difference as Delta beat Millard. It was home and away the whole time, but Delta had a 20-14 lead going into the fourth quarter. Millard scored with four minutes left, up 21-20. But the Rabbits backtracked and Cam Skeem scored the game-winning touchdown.

The Patriots extended their season by at least one more game with a resounding victory over the ALA in the first round. Providence Hall scored all of their rushing touchdowns, led by Robin Limutau and Tate Edwards, who each scored two goals.

A five-touchdown second quarter by the Rams helped them build a lead they wouldn’t undo as they advanced past Judge and into the second round. South Sevier senior Carter Abraham recorded six total touchdowns on the night, including a 30-yard pick six late in the second quarter.

The Bears earned a date with Beaver in the second round thanks to a comfortable first-round result on Big Friday night. Sophomore Bronson Dixon practically lived in the end zone, scoring four rushing touchdowns to lead Summit Academy offensively.

Looking for a budget bailout? A personal loan could be the answer