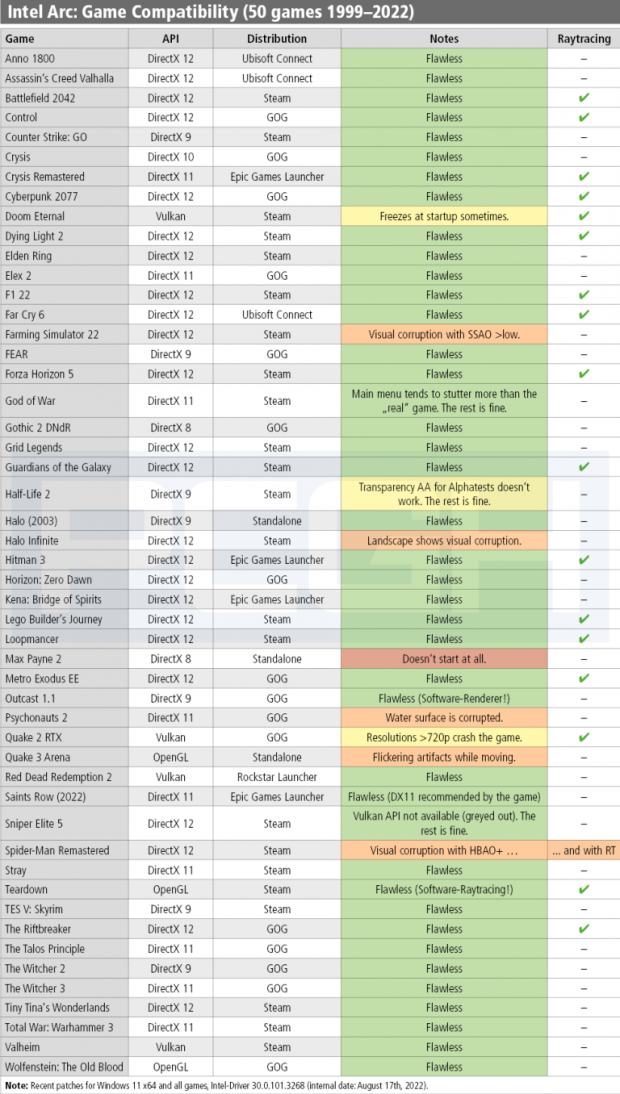 The folks at PC Games Hardware tested the Intel Arc A380 graphics card, which is great to see after hearing that Intel Arc GPUs will use a DirectX 9 to DirectX 12 emulator…because Arc A-series desktop GPUs don’t have no native DX9 API capabilities. This means we get Arc hardware + Arc software + GPU compatibility in 50 games as a great first look at Arc GPUs (but not against AMD and NVIDIA in these results).

As for the games tested, the new Intel Arc A380 graphics card ran games such as Crysis, Control, Cyberpunk 2077, Elden Ring, F1 2022, FEAR (one of my favorites), Red Dead Redemption 2, Stray, The Witcher 2 and 3, and many more. As for games that didn’t work, PC Games Hardware notes that Max Payne 2 – which runs on the old DirectX 8 API – “won’t start at all”.

Doom Eternal running Vulkan via Steam would sometimes freeze on startup, while Half-Life 2 running DX9 via Steam with Transparency AA for Alphatests did not work, while they noted “rest is fine”. The 50-game spread is a great mix, showing that the Intel Arc GPU experience isn’t as bad as it could be. It should hopefully drastically improve as the weeks and months go by, at the same if not faster pace… but so far not bad at all.

But we have to remember: it’s on a particular system, not all Intel Arc GPU owners will have the same specs, games, resolutions and APIs used.