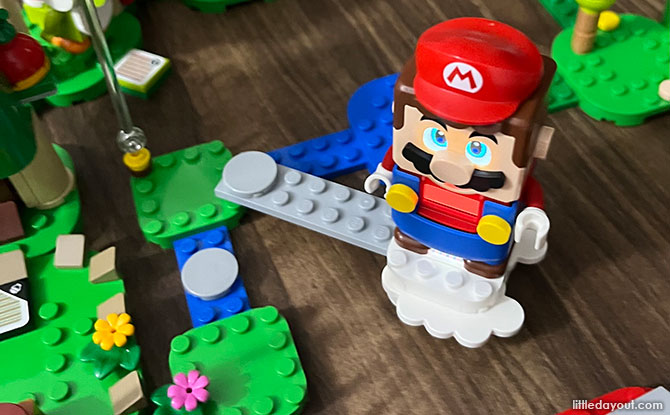 A sure-fire hit with Super Mario fans, LEGO has gone even further with clever Super Mario minifigures and an all-new play experience! This 231-piece starter playset is the perfect entry point into the LEGO Super Mario universe and a starter course required to play with other LEGO Super Mario expansion playsets. 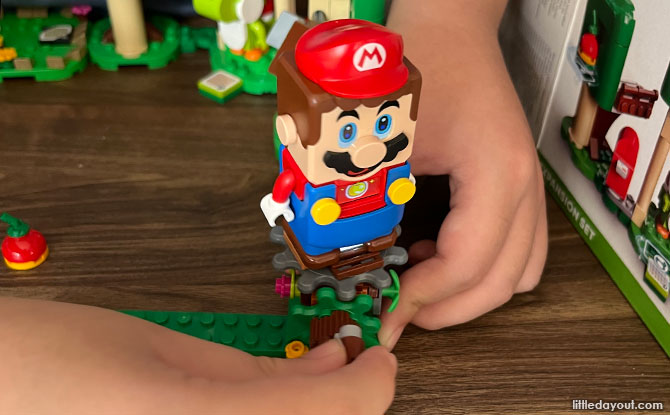 A super cool and adorable electronic LEGO Mario minifigure is at the heart of the playset as he comes to life as a real-life character, once powered by two AAA batteries (not included in the set). This toy talks! He exclaims: “Lego Mario time!” and when you leave him alone for too long, “I’m tired!”, he starts with “let’s go!” And before going out, say goodbye with “See you later!”

It gives animated expressive facial responses through the small LCD screens in its eyes, mouth and chest that convey a wide range of emotions, with multiple different instant reactions to movement and course information.

It has color sensors with a scanner to interact with its environment, such as water, grass, flame, wood and sand icons appearing on its chest screen when placed on a blue surface , green, red, brown, and yellow respectively, with a built-in speaker playing iconic sounds such as the clanking of coins, the victory endgame melody, and the very familiar musical theme from the game’s original music video.

My kids also loved taking off his pants and legs, which makes LEGO Mario exclaim, “Mama Mia!” and other shock factors trigger her cries of “Argh!” when it is burned by lava or poison swamp respectively by jumping on red or purple bricks. 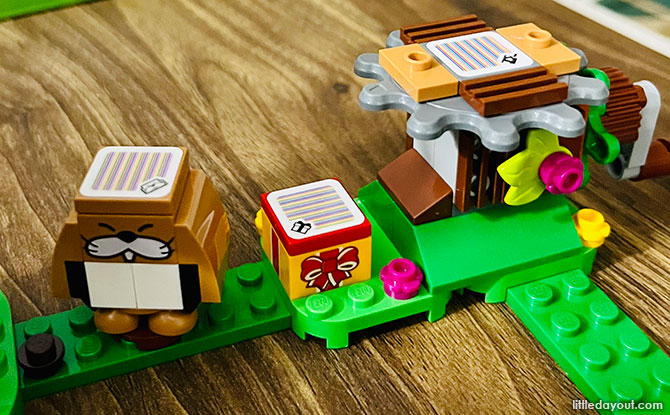 With only 231 pieces, including many blue, red and green boards to join the sections, the construction is simple and my two middle schoolers easily set up their first course in half an hour, so the recommended age for 6 and above above.

To get started (as there is no accompanying manual), players will need to download the free LEGO Super Mario companion app, available on iOS and Android to establish a connection between the app and LEGO Mario, as well as a guide in the construction of different courses. .

Simple 3D instructions show how to build each section with zoom-and-rotate viewing tools, but leave course layout up to the player-builder. Beyond that, the app offers video tutorials for further building suggestions and how to level up for enhanced play and creative problem solving.

Running the course and its challenge 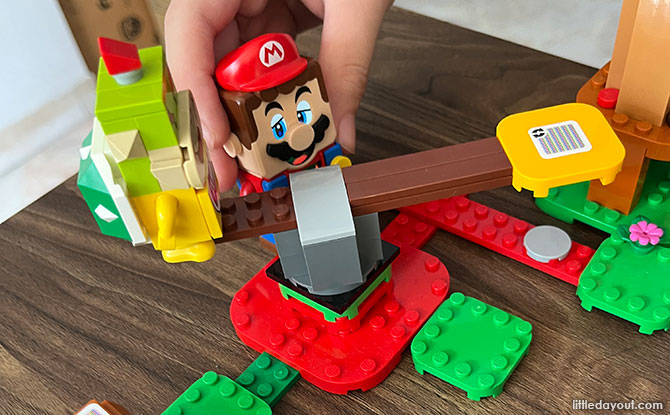 LEGO Mario’s task is to collect virtual coins as he travels the course starting from the green pipe (the pipe hole he comes out of in the video game) to the final goal post with a flag” Bowser” in less than a minute. time limit, tackling obstacles and enemies along the way. When he runs out of time, he will shout “Oh no!”

There are seven action bricks that trigger immediate responses from the LEGO Mario minifigure when he encounters various elements, each with a barcode on them, such as the moving rotating and cloud platforms, the question mark block and Goomba and Bowser Jr. buildable figures to challenge. and jump on it.

When Mario scans the barcodes, his screen reacts accordingly to perform actions as there is a different effect based on each item resulting in rewards in the form of coins, a power-up mushroom or a full invincibility star with sound effects and music.

When Mario jumps on Bowser Jr., an explosive pow icon appears and he earns a coin for defeating his enemy! The final total score displayed on his chest screen is based on how many coins he has collected at the end of the course or within the time limit.

A solo player can re-race the course to aim for higher scores or compete against another player to see who collects the most coins, which my two kids had fun taking turns doing! 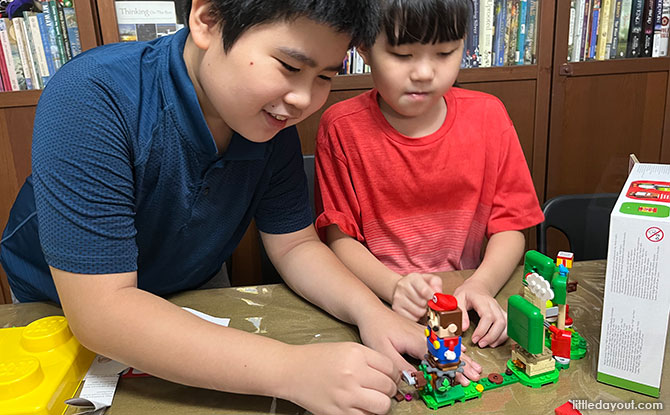 The beauty is in the freedom to design and layout each different Super Mario route for Mario to advance. It lets builder players change the game by rearranging the course to design their own LEGO Mario adventures and take the game to new levels.

As the starter course itself is relatively small but is the only way to get an electronic LEGO Mario that interacts with the different parts of each course, combining it with another expansion set from the LEGO Super Mario range will in in addition to the builders-players to exercise the design. -think to some extent and keep building on more enjoyable challenges for unlimited play.

Lego Super Mario rocks! Once aware of the structure of the game, my young builder-players happily activated the electronic LEGO Mario to maximize play and integrated the starter course with another later expansion set from the LEGO Super Mario ecosystem!