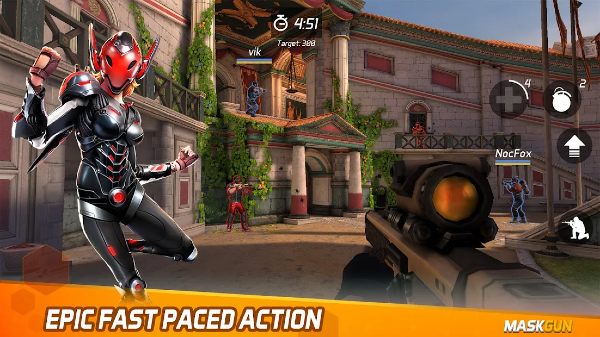 Battle Royale games are surely popular all over the world. At the same time, other genres like shooting and casual games are also extremely popular. At the latest news, the shooting game MaskGun has crossed 60 million players. This Indian-made game has been making headlines as it gears up for its third birthday.

Crossing the one million player threshold is a feat in itself, especially in today’s fierce competition. Here we have the Indian-made MaskGun game which has surpassed 60 million player downloads. Developed by SuperGaming, MaskGun has come a long way in just three years. Likewise, players can expect the Third Anniversary Update very soon.

Looking back, MaskGun was announced three years ago in January. This also means that players can immediately access the Third Anniversary Update. And like all updates, we can expect several updates and improvements to make the shooter even more interesting.

“MaskGun’s anniversary update is our biggest yet. 1v1 in particular has been the most requested feature by the community. It aims to be a test of true skill in showcasing the best talent from the over 60 million MaskGun players because there won’t be a team to make up for your shortcomings or carry you into a match,” said Roby John, CEO and co-founder of MaskGun.

New MaskGun Features: What to Expect?

As part of MaskGun’s third anniversary update, new skins and a revamped user interface can be seen. Speaking of new skins, MaskGun introduced new female agents and dragon weapon skins. More importantly, it brings the one-on-one mode that players have been asking for for some time now.

The 1v1 game mode pits one player against another, as the name suggests. This mode sees who wins, allowing players to choose from three weapon types. They can choose between an assault rifle, a shotgun and a sniper rifle. Plus, your consistent wins propel you higher on the MaskGun leaderboard.

This will also allow you to earn more MaskGun rewards and upgrades. The update is currently available on Google Play and the App Store. 1v1 mode can be accessed from MaskGame > Rumble section > 1v1 Mode.