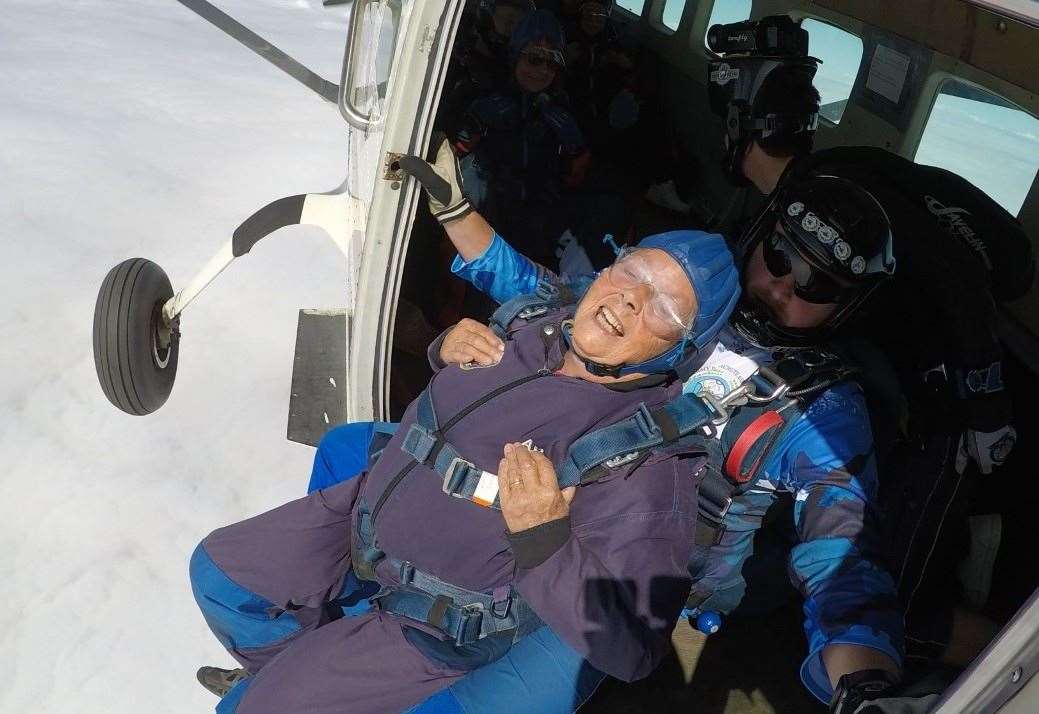 It could have been very different for the woman who went on to found Oakhaven Hospice, one of the New Forest’s best-loved charities which since 1990 has cared for thousands of people at the end of their lives.

Dr Jan Swallow’s life nearly ended at the age of six when a direct hit from a German bomb during World War II destroyed the factory opposite his nursery school in Luton.

She and her comrades were protected by an air-raid shelter, but it took them hours to be dug up.

The incident is just part of Jan’s life story in which just two years ago, to mark her 85th birthday, she jumped out of a plane as part of a fundraiser for Oakhaven – which she helped found and where she became its first medical director.

She’s captured her story in a new book, It’s Not Where You Begin, whose proceeds will go to the hospice, and which will prove entertaining to those who only know her from her grassroots work.

Her stories include a broken wrist in a hurricane at sea and how her father’s death planted the seeds for her work at Oakhaven Hospice.

Jan describes her life as “run more by serendipity than ambition or financial gain”, although as she grew up in Luton she harbored a secret desire to enter the medical profession.

She said: ‘It was what I had always wanted to do, but we weren’t a medical family at all. My father was a school principal.

She also had thoughts of becoming a veterinarian – but these quickly evaporated when someone asked her, “Could you give an elephant an enema?”

Jan began her medical training at St Bart’s in 1953 when she was one of four women admitted out of 60 men.

She said she “enjoyed her time immensely” although “probably had too much fun as a student”. It’s no regret, however, as she adds, “The memories far exceed anything I could have from passing exams.”

From St Bart’s she went to Luton and Dunstable Hospital where she worked in the emergency room. The memory of his first patient remains vivid in his mind to this day.

She said: “He was a young boy whose right foot was hanging by a tendon, but he was shouting, ‘Don’t cut it!’ When we took off his pants, I was shocked to find that his other leg had been amputated below the knee.

The boy had lost his first leg after being hit by a train. He claimed he went on the trail to save a dog and his story turned him into a hero with the public donating money to help him.

Later in life, however, he ended up in prison, from where he escaped when he was taken to another hospital. When he was found by police, he ran onto a nearby train track and lost his other foot.

Jan said: “I was wondering if he thought, having received money the first time, it would happen again?”

Such meticulous planning has never been a part of Jan’s life – like when she ended up sailing the seas after spotting a newspaper advertisement.

She responded and got the job that took her all over the world. Jan said: “I had to be ready for anything and able to cope with most things.”

On one trip, that meant encountering Force 12 Hurricane Hilda in which the ship rolled wildly as Jan attempted to repair an elderly patient’s fractured wrist.

She said: ‘While under anesthesia she sang Nearer My God to Thee. She had no idea how close she was to my anesthesia skills and a Force 12 gale.”

After four years at sea, Jan finally landed in 1968, joining a GP practice for the University of Bristol. It was during his time there that his father suffered a heart attack which was ultimately to prove fatal.

Visiting him in the hospital, she found him facing the end of his life hooked up to medical equipment that couldn’t save him, and his distressed wife by his side feeling useless.

Jan said: “I just felt there had to be a much better way than this to take care of people who are dying.”

That moment would come back to him years later when in 1988, Lymington resident Phoebe Coates asked him to start a hospice in the town.

By then Jan had moved to the New Forest after her husband Greville had become headmaster of Moyles Court School near Ringwood.

At the time of Ms Coates’ offer, Jan was working at the Christchurch MacMillan unit. After establishing Oakhaven, she spent six years there, where she says caring for terminally ill patients was a “privilege”.

Her dedication to hospice has seen her carry out many unusual fundraising activities, such as when she challenged the whole of Lymington to do ‘something stupid’ – and ended up standing on the steps of lawyers Moore and Blatch, singing the national anthem.

Jan laughs: “Yes, my life has certainly been interesting.”