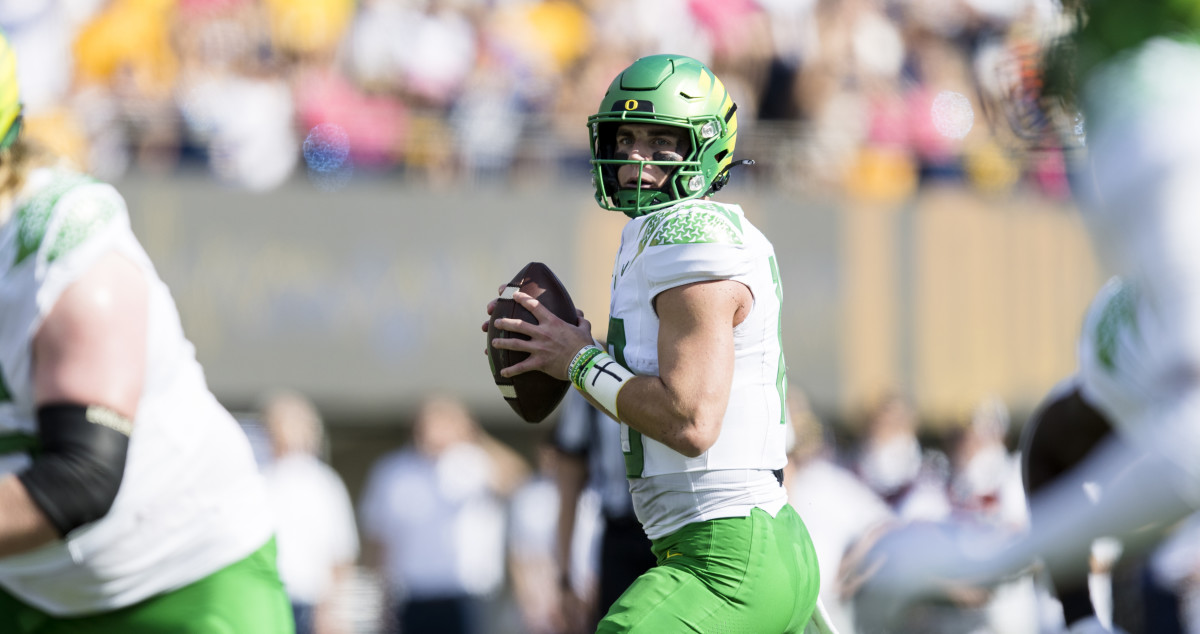 This week’s Player of the Week for Oregon is the team leader himself, quarterback Bo Nix. Nix has shown just how special he is since moving from Auburn and leads that offense averaging 525.8 yards and 42.3 points per game.

Some college football fans call him a dark horse for a Heisman spot, but anyone who’s seen him play this season can tell Bo Is to know. After going 22/28 and throwing for 283 yards and five touchdowns against an undefeated UCLA Bruins, Nix continued his dominance this weekend.

He finished Cal’s game with 27/35 for three passing touchdowns and 412 yards to two interceptions. Both of those interceptions could have been avoidable, with one being a reverse ball in triple coverage and the other a hail just before halftime.

Against the Golden Bears, Nix made plays when he needed to, whether it was bouncing it off his pocket to find his receivers on the field or picking it up himself to set up his offense for success.

What has been impressive for Nix this season is his ability to influence the game with his legs. In eight games, he is second on the team in rushing with 441 yards and 11 rushing touchdowns.

On Saturday, he added three more rushing touchdowns and 59 yards against the Bears.

Nix performs so well that his stats put him in the same conversations as Marcus Mariota in his 2014 Heisman Trophy season where he led the Ducks to a national championship appearance.

Adding a new offensive coordinator and veteran quarterback to the program could be the recipe this offense needed for the success it has had all season. The Ducks finished that game with 586 rushing yards and six touchdowns, making it their sixth game with over 500 total rushing yards.

One play that stood out to me came late in the fourth quarter when Oregon was leading 35-10 with less than four minutes to go and Nix and his offense hung on, finding Patrick Herbert for a 40-yard touchdown, the first of his college career.

The main lesson to be drawn from this?

Oregon is never stratified with just one win, but rather they want a win that lets the other team know the Ducks will give you their all for four quarters. The Ducks are now 7-1, 5-0 in Pac-12 play and still hold that number one spot in the conference.

Join the discussion on our forums HERE