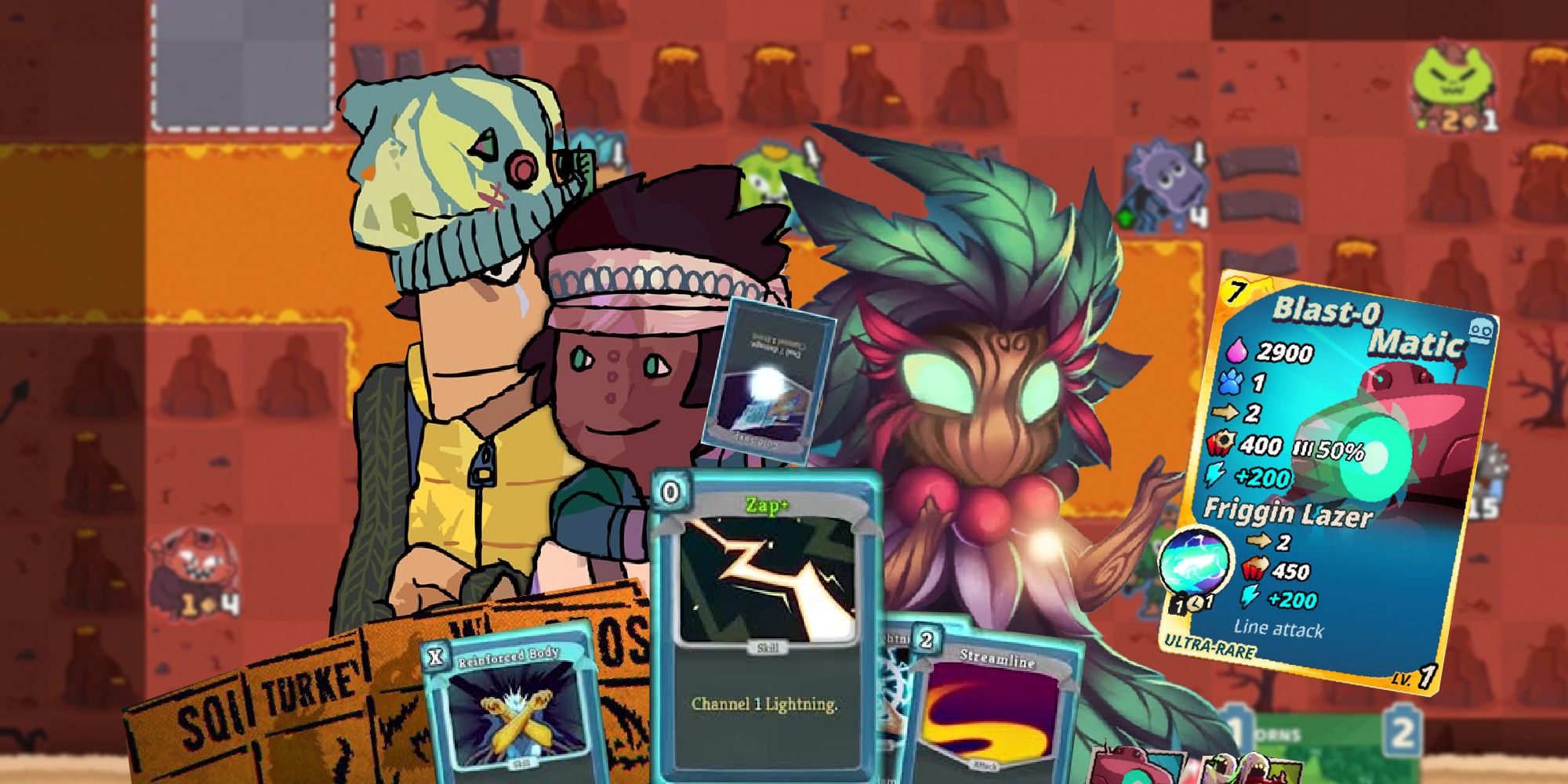 Floppy Knights has received a lot of attention since its release, especially because it arrived on Xbox Game Pass on day one. Much of the hype also comes from its quirky characters, challenging yet fun deck-building and turn-based gameplay, and charming cartoonish art style.

You can spend countless hours trying to help Phoebe and Carlton use their floppy disk creations to defeat their enemies and finally get out of Phoebe’s parents’ house. It’s easy to get sucked into this world, and it ends up making you crave more tactical and card-based strategy games with equally enticing premises. Luckily for you, there are a few great titles that could hit the mark.

If you really like the grid-based turn-based combat aspect of Floppy Knights, you’ll enjoy Obsidian Prince. It’s more of a dungeon crawler, but it doesn’t feel boring due to the smooth tile movements and fun enemy progression.

It starts off perfectly with a nod to the games before. As with any fantasy setting that has you slaying monsters left and right, Obsidian Prince’s first mission is to kill rats.

It’s quirky but punishing if you don’t think about your tactics. Limited energy comes into play when exploring, and you can’t return to places you left off (which is very upsetting to find out when it’s too late). “Inspiration Cards” and “Stories” serve as decks that passively affect your hero’s build and give you actions.

Every piece of text is worth reading and the art style makes exploring a treat. Beneath these seemingly shining aspects, however, permanent death lurks.

Oaken is a magical roguelike that sets its turn-based combat in a glowing world with mythical creatures all around. The biggest draw to exploring the Grand Oak is the art style. While beautiful character models and world environments have become the standard for open world gamesit’s still a sight to behold for games like Oaken.

This title is still in early access, but it already does a great job using turn-based card tactics. Plus, you can collect guides for each race, so the replayability is there. It’s great to build your strategy as you progress, especially when it comes to riskier games.

Paper Soldiers is a hidden gem, largely because it was created by one person, and it’s only available on Itch.io for download. You can get it for free or pay whatever amount you want to support its independent creator, Andriy Bychkovskyi.

This game has a short intro on how you need to defeat a tyrannical king, then it throws you straight into the game with no real tutorial. However, it’s not hard to grasp the gameplay through some trial and error on your first spin.

You can hover your mouse over cards and icons to figure out what they do, then build your deck to place actions on the tiles until you exhaust the king’s power, while preventing your own resources from falling to zero.

What’s great about this little game is its fun little descriptions, nice art style, and simple interface. You can also overthrow a corrupt monarchy, so that’s a win all round.

Ah, kill the arrow. It really is a game for masochists, yet hard to put down. As the name suggests, you climb The Spire to defeat one last corrupt entity.

You’re never explicitly told you’re the good guy, but you can’t be bad if you have a whale buddy giving you rewards. The game uses turn-based combat and map building, but ditches grid movement to make way for energy-based actions.

A few things to know right away – your health doesn’t automatically regenerate after each encounter, even relics and other buffs you pick up can have their consequences, and the game ends completely if you die.

If you can handle the pain that comes with having to start all over again after reaching high levels and beating countless elites, it’s worth taking on Slay The Spire.

This game isn’t the first in its series, but you can dive straight in without feeling like you’ve missed a thing. It has a great comic book feel, both in art style and in Krumit’s voice.

Using your deck, you fight monsters on different tiles. You unlock various heroes and travel the world to save it from the horrors of Nukropolis. The game can feel very difficult at times, but the fun story and style is enough to temper any frustration you might feel after a number of defeats.

Another entry that falls comfortably into the eccentric gang of bridge builders, Oogy: Can You Help puts you in the shoes of a sheep who is tasked through a gateway named Phil to help (or defeat, if you will). please) a bunch of household items. You read that sentence correctly.

The game is fun, doesn’t take itself too seriously, and has a great interface if you want something more minimalist. You’ll mostly see a few fun designs and backgrounds for each “room” you enter, but there isn’t much else in terms of visuals.

Related: The weirdest games on Steam

Oogy’s strengths really lie in the humor of his conversations, the absurdity of the concept, and the mystery behind why you got into this predicament in the first place.

There’s also a demo available if you want to try being called a sheep without feeling offended.

Now here’s a game that challenges you to put all the cards on the table (pun intended). Inscryption looks noticeably darker and more confronting than other titles due to its story and design.

The game almost immediately asks you to make heavy choices that involve trading wildlife for their lives, so it sets the tone without missing a beat. To progress, you build your deck with various creatures while playing against a mysterious character who has your life in his hands. Then more twists appear that raise the stakes even further.

If you want a simple comparison, it’s basically Gwent except a whole lot more gruesome. The gameplay itself is really engaging, but the atmosphere and story is what makes it so memorable.

When you cast Phobias, you’re greeted by startlingly red lips that address you in a gloriously flamboyant British accent. It’s a fantastic Rocky Horror reference that immediately tells you exactly what you’re getting into.

This pair of sensitive lips is Lippy, your in-game mentor. Basically, you need to use your phobias, or Phobias, as buddies for battle. The basic premise of this game is to overcome fears and use lots of puns, which isn’t necessarily a bad thing. The the monster design is creative and you have the option of playing up to ten simultaneous battles. This fun mechanic really makes turn-based combat more complex and engaging.

You can even quit the game and return to your current battles, but this can be annoying for other players if you’re playing online. Expect a mobile-style UI to go along with it, as the game initially launched for Android and iOS.

Ardor is great for its simplicity. You have hex grid-based movement, energy used per card, and tactics to defeat your enemies on the board, and that’s it.

If you’re looking for a story, you’re not really going to find one. The great thing about Ardor is that it doesn’t necessarily need a story to be fun. You just dive into campaign mode or punish yourself with endless mode.

The mechanics and upgrade system are really polished, considering how new the release is. You earn “teeth” for upgrading your cards, and maybe it’s best that players don’t know why the payout system is teeth.

The best part is that it’s free on Steam, so you literally lose nothing by giving this addictive game a chance.

Unlike the others on this list, Signs Of The Sojourner is entirely deck-based. The cards you collect come into play only insofar as you need to match the symbols in order to get positive results in the conversations.

It’s kind of a nightmare for players determined to make sure every NPC loves them, but it makes the world even more immersive and really makes card tactics essential. As you travel with your caravan and talk to more people, you learn more about the world you live in.

It’s a gripping tale worth replaying multiple times to fully enjoy the experience. Each race even changes your encounters, so it feels like new revelations and new routes are revealed every time.

Next: Great Games To Play If You Like Earthbound