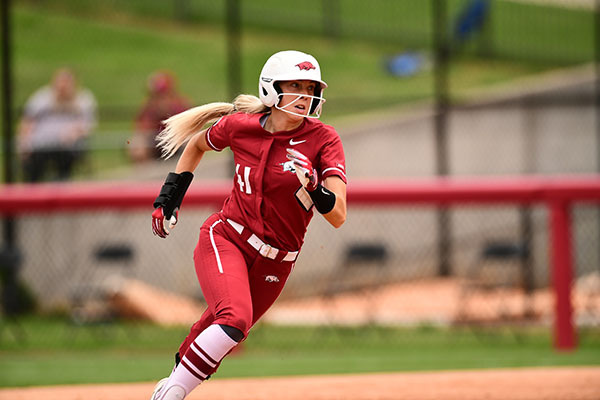 FAYETTEVILLE — University of Arkansas coach Courtney Deifel said her team could have played better at the Puerto Vallarta College Challenge to open the season, but the Razorbacks are eager to take advantage of the friendly confines of Bogle Park this weekend.

The No. 10 Razorbacks (3-2) will play five games over three days in the Razorback Invitational. They start with a game today against Illinois at 3 p.m.

A game against Western Illinois that was scheduled for today has been moved to Sunday at 1:30 p.m.

Arkansas dropped a spot in the ESPN.com/USA Softball poll this week, after losing twice to Washington in a top-10 clash in Mexico.

“I didn’t feel like we played well, really at all levels,” Deifel said. “I think when you’re not playing so well and still come out 3-2, you’re happy with that.”

Deifel said the Huskies, who moved from seventh to fifth this week, narrowly outperformed the Razorbacks. Washington and All-America pitcher Gabbie Plain shutout Arkansas 8-0 in six innings in the first meeting. The Razorbacks saw a 4-2 lead evaporate late in the set and turn into a 10-5 loss in Game 2.

“I don’t think they’re necessarily better when you play player for player, but they certainly played better than us on that opening weekend,” Deifel said. “We’re definitely a better offensive team than what we’ve shown all weekend and we’re presenting it better too, even more so against Washington.”

Deifel also praised rookie Spencer Prigge for shortstop. Prigge arrived as a corner player, but impressed with her defense in the fall and secured the starting spot on short notice.

Freshman Kacie Hoffman did not see action in Mexico due to an undisclosed injury. But she should have some shots this weekend, Deifel said.

“She’ll be in the lineup this weekend and we’re really looking forward to it…it’ll be a bit longer to play on the court,” Deifel said.

Arkansas also hosts Arkansas Center, who upset then No. 14 LSU last weekend, March 1 for just one game starting at 5 p.m.

Arkansas won’t hit the road again until March 11, when it travels to Harrisonburg, Va., to compete in the James Madison Dukes Invitational.