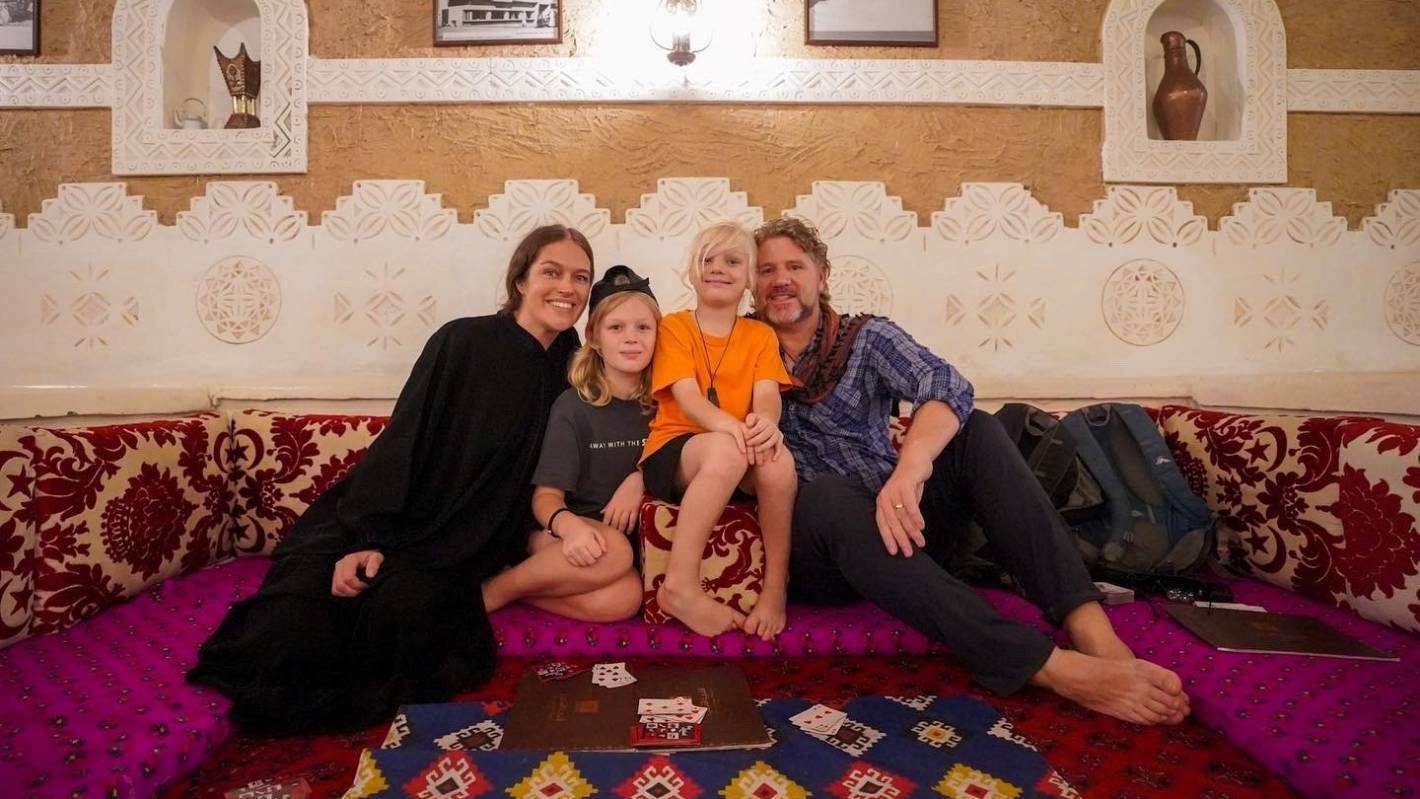 The post-lockdown adventures of the globe-trotting Kiwi family in Bangladesh, Pakistan and Saudi Arabia

Sarah and Gavin Steiner deliberately did not tell family and friends that they were taking their two young boys to Pakistan until they had already arrived in the country.

Aware of the misconceptions of many westerners about countries whose names end in “-stan” – the suffix comes from the Persian root istan (earth) – they didn’t want to risk others pushing them away from a trip they’ve been looking forward to since the Covid-19 pandemic forced them to put their globetrotting lifestyle on hold.

The couple had been traveling with their sons Harry and Oscar for just over a year when the virus began its catastrophic spread around the world, forcing them to make the ‘heartbreaking’ decision to return to New Zealand.

Using their savings and the funds from the sale of their house on Auckland’s Māngere Bridge and reinvesting outside the city, they had visited dozens of countries in Asia, traveling along the route of silk to Middle Eastern countries such as Jordan, United Arab Emirates, Oman and Egypt.

Do you have an interesting travel story to share? Email [email protected]

READ MORE:
* Wake up somewhere more exotic: Five of the best places to be a digital nomad
* Stressed about tips abroad? A guide for panicked ‘New Zealanders on tour’
*Adults Only: Five of New Zealand’s Best Travel Experiences for Adults

Grateful for having a safe port in their home country but reluctant to put down permanent roots, they traveled the North and South Islands in a motorhome before moving to the Cook Islands in December 2020, settling to Rarotonga and exploring other little-visited islands such as the ultra-remote Pa Enua, which spans two million square kilometres, and Mangaia, where fossilized coral cliffs surrounding a lush interior have created one of the the most remarkable landscapes of the Pacific.

As soon as Covid-related travel restrictions eased, they embarked on their ongoing world tour, visiting countries including Bangladesh, Pakistan and Saudi Arabia.

Deciding to leave the “paradise” that is the Cook Islands was one of the hardest decisions they have ever made, said Sarah Steiner.

“It was an emotional day the day we left Rarotonga, but it had to be done. We were all eager to start traveling full time together again.

So, in May 2022, they set off for Bangladesh, excited to explore a country where tourism was still in its infancy.

“One of the main reasons we had such a strong desire (to visit) was that it was so little known and we realized we knew so little about it,” Steiner said of the country. , which the New Zealand government advises Kiwis to “exercise caution” when visiting.

“It felt like a whole new kind of paradise to explore and culture to experience from the start.”

The tigers of the Sundarbans mangrove forest are among the country’s best-known attractions, while lesser-known sights include the UNESCO-listed 15th-century mosques and mausoleums of Bagherat, the Buddhist remains of Paharpur and the nearly 700 rivers meandering their way through supercharged cities – Bangladesh is said to be one of the most densely populated countries on the planet – and landscapes so lush they look like they’ve been digitally enhanced.

A highlight for the Steiners was staying with a family in the remote rural village of Ekduaria, set among rice paddies and lakes in Narsingdi district.

Days were spent helping the family harvest fresh fruit and vegetables and preparing breakfast in the earthen kitchen, and getting into the rhythm of village life.

“Harry and Oscar would fish in the village ponds, catch fish by hand with the local boys and play football in the dry paddy fields,” Steiner said. “Gavin helped the farmers haul hay for their cattle, balancing it on his head as they did. And I spent time at the local elementary school talking with all the kids.

“We harvested the jackfruit; drank chai in the village; milk the cow for breakfast; and held a cooking contest in the mud kitchen with our host, Jafar.”

As seasoned travelers who pride themselves on their adaptability, the Steiners had no trouble adapting to their new lifestyle. One of the most valuable lessons the boys have learned from their travels is to take things as they come and people as they are, Steiner said.

“Children are naturally amazing as travelers because they have no preconceptions about how other people will be or should be. If they see children playing with a ball, they join in and play with the ball, regardless of environment or cultural or language barriers.Children are amazing like this and constantly inspire and remind us to embrace this philosophy as adults and as human beings ourselves.

Steiner said they were blown away by the hospitality they received throughout their stay in the country.

“If we had accepted every tea or coffee invitation we received all over Bangladesh, we would still be here!”

They received an equally warm welcome in Pakistan, where they traveled on foot after a brief stay in India, receiving spontaneous invitations to stay almost everywhere they went.

While the New Zealand government advises against travel to parts of Pakistan and recommends avoiding non-essential travel elsewhere in the country, Steiner said they never felt unsafe, going so far as to describe their stay there as “one of the best family travel adventures we’ve had to date”. This was, it should be stressed, before the floods which affected some 33 million people and killed at least 1,314 people, according to Pakistan’s National Disaster Agency.

The family explored the cultural and artistic hub of Lahore and the ‘beautiful green capital’ of Islamabad before catching an overnight train for the southern megacity of Karachi.

“The train took 24 hours and was an awesome way to see the Pakistani countryside,” Steiner said. “We met families on the train and shared a meal as we headed south.”

Staying with a local Traveler family they had been in contact with for two years, they tried traditional dishes such as nihari (a rich stew of slow-cooked meat flavored with spices and bone marrow) on the famous Burns Road; rode horseback along Clifton Beach by the Arabian Sea; and visited sites such as the Mausoleum of Quaid-i-Azam, a marble monument topped with a dome dedicated to the founder of Pakistan, Mohammed Ali Jinnah.

As Western tourists, they were such a novelty that they were invited to appear on the national news channel 92 News.

A highlight for Steiner was celebrating Eid al-Adha with their host’s extended family. She accompanied the women to the local bazaar to buy the feast they shared, while Gavin went with the men to the mosque for morning prayers.

Like in Bangladesh, they were invited into people’s homes wherever they went – for cups of tea, meals and sometimes even to stay.

“Pakistan absolutely surprised us and outdid itself in hospitality and friendliness. We are already planning to come back early next year,” Steiner said.

After a brief stay in Kuwait, they headed to Saudi Arabia which, essentially closed to tourism until 2019 and then again during the pandemic, has only recently been welcoming foreign visitors.

The largest country in the Middle East, the kingdom surprised the Steiners both with the diversity of its landscapes and – again – with its hospitality. The New Zealand government is advising Kiwis not to travel within 30km of the border with Yemen, to avoid non-essential travel to some other areas and to be “extra careful” elsewhere.

The family route traveled from coast to coast, visiting Hegra, the ruins of the second city of the ancient Nabataean kingdom, which bears an uncanny resemblance to its famous sister city Petra in Jordan, and the port city of Jeddah with its luxurious resorts.

Again, chance encounters with strangers who quickly became friends provided many of their most memorable experiences.

Celebrating Gavin’s birthday at a restaurant in the city of Dammam, the family were not only surprised with local cakes, dessert and a hearty rendition of Happy Birthday by the owners and staff, but also an invitation to a vast camel farm, where they were presented. with a whole sheep to eat.

In the small mountain village of Al Habala, they crossed paths with a man returning from prayer who invited them to have lunch at his home.

“He proudly showed us around the misty mountain villages where he grew up, high above the desert,” Steiner said.

All the while, the boys have been following what Steiner calls their “worldschooling” – the learning “that happens naturally as we travel through languages, culture and geography.

“We support daily learning with reading and math and both boys keep a diary. Each of the grandparents is involved in their global education through phone calls and reading sessions and the boys write letters and postcards home.

Along with the uninterrupted time spent together, Steiner said the best things about their nomadic lifestyle include adapting to different cultures and lifestyles.

“The world is made up of so many different people, with different cultures and beliefs, but when you take it apart, we’re not that different. It’s still our biggest reminder of how people are connected.